The world media has given wide coverage to the fact that the sign-language interpreter who was standing next to world leaders interpreting their speeches at the funeral for Nelson Mandela badly botched his job and may have been an impostor. As testified by many deaf people present at the ceremony or following from all over the world, his sign language was gibberish and incomprehensible. As a result, they did not get the message.

Unfortunately, similar situations occur fairly often with spoken language interpretation too. That is because those who recruit interpreters often are not interpreters themselves, do not understand what is needed, nor the difficulty of the task, and tend to go for the cheapest.

In this case, the interpreter was hired by a fly-by-night agency that has since disappeared. He was left to work alone in a high-pressure situation without a second colleague and was clearly out of his depth. Now the poor fellow is being put up for international ridicule, and the government (i.e. the client) is also under attack, all because they used a bad agency. 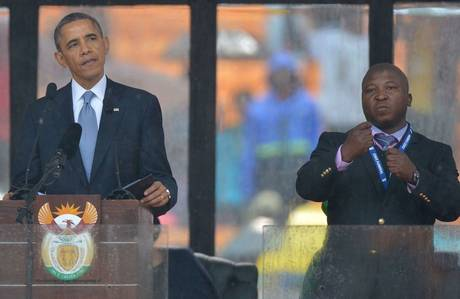 The interpreter (right) next to President Barack Obama.

The South African deputy minister for women, children and people with disabilities has since recognised that Guidelines say we must switch interpreters every 20 minutes.“That is because interpreting is a highly stressful activity that requires full concentration all the time. The level of concentration needed cannot be sustained for more than 30 to 40 minutes, after which it is likely that lapses and errors will occur.