Whether they be doctors, engineers, lawyers, dentists, architects, mechanics, translators or simultaneous interpreters, all professions need to have standards. What are they?

Standards are rules on how a profession behaves, how it acts, to provide the services it renders to society in a manner that satisfies the needs and expectations of consumers. For instance, if you ask an architect to design your house, you expect the roof to be supported by beams strong enough to carry its weight and resist storms. Architectural standards prescribe the dimensions of beams, according to their material, so that they can do this.

Standards are set by the respective professions or by international bodies, such as the International Standards Organisation (ISO) or, in the case of foods, by the Codex Alimentarius (FAO/WHO). Other bodies also set standards. Our interest here is in standards set by a profession.

The standards for conference and simultaneous interpretation are set by the International Association of Conference Interpreters (AIIC). At its 36th Assembly in Addis Ababa, in January 2015, AIIC members discussed, among other things, the importance of adhering to our professional standards, in the face of an increasing number of cases of sub-standard simultaneous interpretation at international conferences. Read more

What are AIIC’s professional standards for simultaneous interpreters?

Their main elements are: 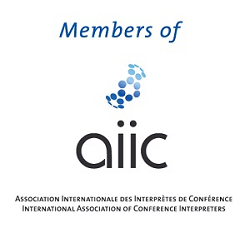 Why are standards in our profession and in others important?

Conference interpretation, whether simultaneous or consecutive, is an extremely difficult and tiring activity, which taxes interpreters’ brains and energy severely. That is why our standards require that we work in teams of two or more simultaneous interpreters per language, so that we can alternate every 30 minutes. And that we work no more than two sessions of approximately 3 hours per day. Otherwise we would not be able to perform our duties for long. We would be mentally and physically exhausted. The quality of our interpretation would drop dramatically. That means delegates would no longer understand what is said and the purpose of interpretation – namely communication – would not be achieved.

Simultaneous interpretation is the most common form of interpretation used at conferences. It happens in interpretation booths (link to ISO standards). These sound-proof boxes with windows allow simultaneous interpreters to listen to speakers and interpret what they say into a different language at the same time. These booths must conform to the ISO standards so that interpreters can hear, see, breath and speak in comfort. The physical conditions must not detract from our ability to concentrate on the speaker’s message and convey it correctly in another language.

Without standards, interpreters cannot do their job properly and ensure crystal clear communication, which is what they are hired for.

Take the case of a conference in French, English and Spanish. A delegate speaks in English. The simultaneous interpreters working into French will listen to English and interpret into their “A” language – French. Those working into Spanish (their “A” language) will work from English into Spanish. If a delegate speaks Spanish, the English “A” interpreters will work into English.

Relay interpretation occurs when an interpreter does not know the speaker’s language and listens to another simultaneous interpreter (a different language booth) who is translating that speaker into a language the interpreter does know, in order to interpret into her/his language. This happens a lot for Asian languages, such as Chinese, Korean, Japanese, Thai, because Asian simultaneous interpreters usually know their own mother tongue and English only. Rarely do they master a third language, such as Spanish or French. So they are obliged to listen to the English interpretation when a French or Spanish delegate speak.

Similarly, European-language interpreters rarely speak Chinese, Korean, Japanese or other Asian languages. When one of those is spoken by a delegate, they have to listen to the English provided by the Asian language booth, so as to interpret into their European language.

In Europe, most conferences use four, five or more languages. They therefore look for simultaneous interpreters who cover most of those languages. They prefer not to use bi-lingual interpreters, as these will not know enough languages. Most organizers will try to avoid relay interpretation, as it increases the risk of errors and slows down communication. So you can say the European language combination standard is multi-lingual.

That is also the standard used by AIIC (which originated in Europe) and explains the classification of interpreters’ languages into “A”, “B” and “C”.

Being perfectly fluent in more than one language, and applying professional standards for interpretation, leads to the result observed by this reporter:

What is simultaneous interpretation?

Let’s unpick what she did that morning and itemise its components.

As the delegate spoke, the interpreter had to make sense of a message composed in one language while simultaneously constructing and articulating the same message in another tongue. The process required an extraordinary blend of sensory, motor and cognitive skills, all of which had to operate in unison. She did so continuously and in real time, without asking the speaker to slow down or clarify anything. She didn’t stammer or pause. Executing it required versatility and nuance beyond the reach of the most powerful computers. It is a wonder that her brain, indeed any human brain, can do it at all.