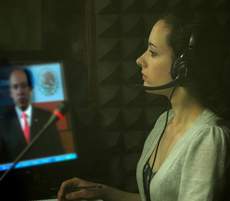 Many years later I still remember the scene vividly and because of it, but also because of my own research on the perception and production of speech, I have the utmost respect for interpreters and the training they have to go through to do their job well.

Many children who belong to minorities (immigrants, migrant workers, Deaf people) act as successive interpreters as well as cultural intermediaries between their communities and the outside world. Despite the fact that they have no training in community interpreting, these children’s natural abilities never cease to impress us. Stanford University professor Guadalupe Vald?s examined the strategies adopted by Spanish-English bilingual youngsters and found they used a number of strategies to convey essential information, including tone and stance. They were also able to compensate for linguistic limitations. Vald?s concluded that the traits and abilities they exhibited were characteristic of exceptional cognitively competent children.

Authors Brian Harris and Bianca Sherwood, some years prior, had described a young Italian girl (BS) who, before she was four, was already interpreting between the Abruzzi dialect and Italian. She then acquired Spanish when her family moved to Venezuela, and English when they moved to Canada. In no time at all she was interpreting from, and to, these languages for her parents: phone calls, conversations, messages, radio and TV programs, etc. In addition, she quickly developed diplomatic skills, softening her father’s outbursts when bargaining with non-Italians. Her father once told her to call his interlocutor a nitwit; she calmly said, “My father won’t accept your offer”!

Some of these childhood interpreters sometimes find themselves, as adults, in the role of professional interpreters after having followed intensive training in schools such as those in Monterey or Geneva. (Of course, many other interpreters have not had to go through this kind of childhood experience although the majority do grow up bilingual).

In addition to having all the skills of translators (see here), professional interpreters must have all the linguistic and cognitive skills that allow them to go from one language to the other, either simultaneously or successively. For example, simultaneous interpreting involves careful listening, processing and comprehending the input in the source language, memorizing it, formulating the translation in the target language, and then articulating it, not to mention dual tasking, i.e. letting the next sequence come in as you are outputting the preceding one. Researcher David Gerver has reported that interpreters overlap speaking one language while listening to another up to 75% of the time!

Interpreters must activate the two languages they are working with. They have to hear the input (source) language but also the output (target) language, not only because they have to monitor what they are saying but also in case the speaker uses the target language in the form of code-switches (see here). However, they must also close down the production mechanism of the source language so that they do not simply repeat what they are hearing (as they sometimes do when they get very tired!).

Given these processing requirements, in addition to knowing translation equivalents in numerous domains and subdomains (e.g. business, economic, medical), as well as stylistic variants, it is no wonder that interpreters, like translators, are considered special bilinguals. As the saying so rightly states:

Photo courtesy of the Monterey Institute of International Studies.

Fran?ois Grosjean, Ph.D., is Emeritus Professor of psycholinguistics at the University of Neuch?tel, Switzerland and the author of Bilingual: Life and Reality, among other books.